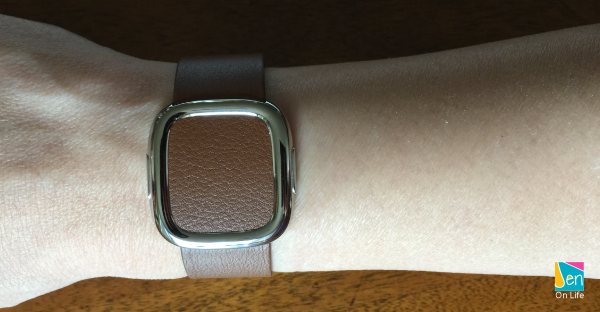 I’ve almost owned my Apple Watch for a year and I still like my watch. Unfortunately I’m not using it as much as I wanted to as a health fitness band especially to track exercising. Yup I’m still working on it as a goal. For now my Apple Watch always reminds me to drink water, stand up when sitting a lot, calendar reminders, and other reminders that I want to be reminded of. In general, the watch helps me to stay healthy and is a good exercise tracker for when I do exercise.

Personalize your Apple Watch with various different colors and band styles. I initially purchased the Apple Sport Watch with the blue band. After wearing it for a year I needed a change. I never liked the band but wore it anyway.

I considered purchasing a 3rd party band on Amazon, but the ones I found that I liked didn’t get good reviews. Because I didn’t want to risk getting a “dud” watch band, I wanted to see what Apple bands were available at the Apple store. I finally found a band that was more to my liking after visiting the Apple store. It is a beautiful band that looks more like a leather bracelet. 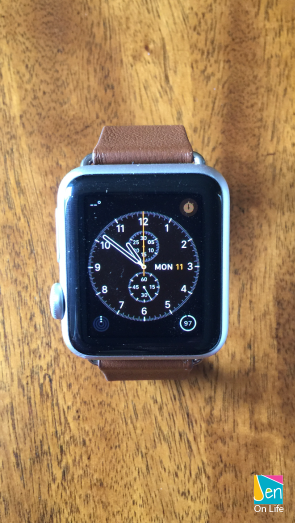 My biggest complaint with the watch is that the battery life doesn’t last very long (if you wear your watch face inside of your wrist) especially since I have the smaller watch face (38 mm). If you do this, the watch would turn on inadvertently even when I wasn’t looking at my watch. Now that I wear my watch the correct way, the battery life lasts much longer. I no longer feel the need to wear two watches because my watch lasts the entire day. I only charge my watch once in the evening or when I’m showering. Before, I was looking forward to the Apple Watch battery charger band, but it got canceled. 🙁

APPLE WATCH IS ALSO GOOD AT TRACKING YOUR SLEEP

My brother recently got his Apple Watch last month and wanted to wear his watch almost 24/7 and track his sleep with the Apple Watch.

When he uses his watch to track his sleep with the Sleep++ app, he likes that the watch monitors his sleep quality. The best part of wearing the watch at night is setting up the alarm. The watch wakes him up by vibrating/pulsing without disturbing his wife. My brother likes that the alarm gently wakes him up through the pulses instead of hearing an obnoxious alarm.

HOW TO KEEP YOUR APPLE WATCH POWERED

I asked what he does to make sure his watch has power during the day. He basically treats his watch like his iPhone. He bought an extra watch adapter so he can recharge it in the car or any where necessary. For the most part, he recharges the watch when he is preparing to go to work in the morning and recharges the watch again before he goes to bed in the evening. That’s enough to keep his watch powered for the entire day (and he also gets to track his sleep).

I wore my watch last night and it basically lost 20% of battery power sleeping almost 7 hours. I still need to work on getting 8-9 hours per night. Once I was getting ready for my morning, I charged it for 30 minutes and the watch was back at 100%. Technically when you wear your watch while sleeping you should put the watch on airplane mode to use less battery power. I’ll try that next time.

I haven’t gotten used to taking off my watch in the morning and charging it when necessary, but I want to try using my Apple Watch like how my brother uses it. I need to get in the habit of charging my watch more often.

CHECK OUT WATCH APPS TO HELP YOU ACHIEVE YOUR GOALS

There are many new, innovative apps that have come on the market since the Apple Watch was released. View some essential apps to install on your watch. I found the Sleep++ app by browsing new apps on the market. This app is changing the way I use my watch. My brother likes the following apps (that I plan to check out):

I’m also curious about Streaks to help me with creating a habit (like walking my dog and exercising).

With new apps, a different watch face, and new a band, it’s like having a brand new watch. 🙂